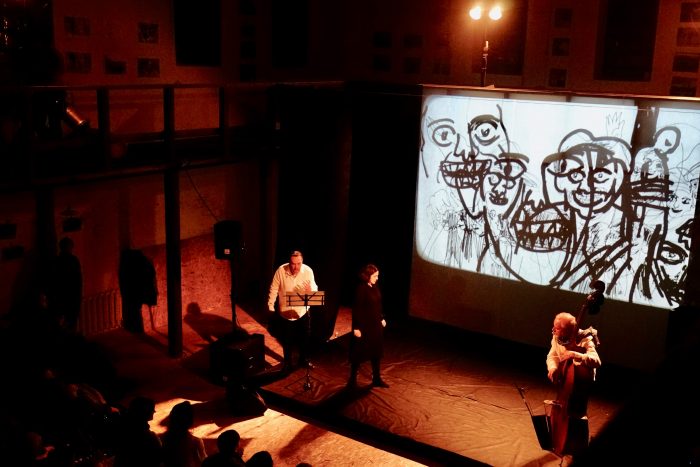 Albert, or the Highest Form of Execution

“Albert” was created after an eponymous story by Yurii Andrukhovych. The performance, following Olia Mykhailiuk’s design, is a form of story which combines text with illustrations, and not only graphic but also musical, ranging from authentic to free jazz. A game of words, intonations, and gestures that emerges from a risky interaction of the writer, acting here as the author of texts, singer and actor, with music and graphics.

The idea to combine exactly this text with exactly these performers and visualization is something greater and more significant than just directing. It is the creation of a special artistic synthesis, discovering the hidden capabilities of the text, which even I, its author, had no idea about.

Albert’s premieres took place at large Ukrainian festivals, such as ArtPole, Meridian Czernowitz, and GogolFest. Just as the shows that followed, they were organized by the ArtPole agency. The first tour in Ukraine coincided with the period when the events of the Maidan began. On February 21, 2014, Albert was the only performance that had not been canceled in Kyiv. In May 2014, Albert was played in the open-air format in Lviv, the city where the events of the story unfold. Old Lviv buildings and Dominican Cathedral became rather expressive decorations. In September 2015, the premiere of the performance in German featured at the International MitOst Festival. In October 2017, it was first presented in Polish within the framework of the project WROCloveUKRAINA.

A viscous and penetrating lacework of sounds, words, phrases, neurotic clanking and bursts of contrabass, flickering pulsation of video and gloomy howling, demonic screaming and singing, praying and gleeful stamping. It was accompanied with explosions, fireworks, public coronation and punishment, burning, blowing, and spitting. I imagined Lviv of those times and that of today, with its wet downtown, dirty outskirts, stone walls, numerous churches, cathedrals, bell towers, streets paved with cobblestone, gutters, wounds, mornings, Rynok, drains, folks, passions and sanctities.

The text, vocal improvisations, animated graphics, directing and scenography amalgamate into some amazing alchemy, which has melted the genre of medieval morality into a fully modern story. For me — the story showing that we still haven’t parted that far from the Middle Ages, one about the cruelty with which society exterminates “otherness” and takes revenge for its moral values.